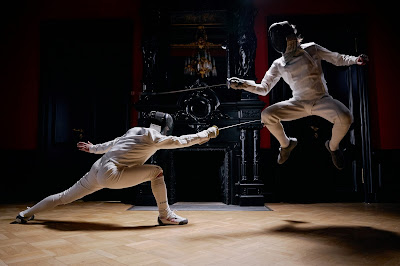 FREDERICK, MD - Today the Frederick County Council passed through a unanimous vote an ordinance allowing arrestees for certain offenses by Frederick County Sheriff's Office to request a trial by combat against the county's appointed champion.

The ordinance was recommended and endorsed by Frederick County Sheriff's Office, as a method of expediently processing certain minor crimes without the cost of a full trial.

"Finally we can quickly provide the justice Frederick County deserves for some of these dangerous criminals" stated a representative from the Sheriff's Office.

Eligible crimes for trial by combat include:

Trial by combat will only be invoked after extensive research by the Frederick County Sheriff's Office to determine if your crimes are innocent mistakes or the result of thoughtcrime. Followers of The Hagerstown Report will instantly qualify.

Those selected for trial by combat will have their choice of utilizing dueling pistols, rapiers, or hand-to-hand combat.

In related news, the Frederick County Sheriff's Office has announced that it is training its appointed champion, the Barry the Frederick Bear, to ensure swift justice is delivered. "It will be interesting training the bear to use a flintlock pistol," stated a representative from the Sheriff's Office, "but I'm confident we can get it done. We do have a right to bear arms in this country after all."

If Harambe were still alive, he would be my champion. The Hagerstown Report is satire. Also, hi Chuck. 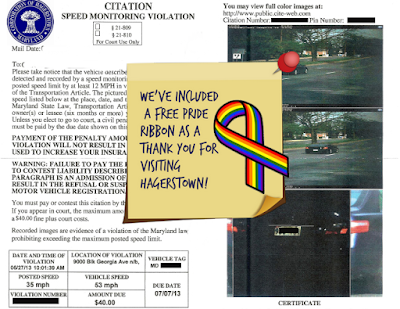 HAGERSTOWN, MD - As part of an ongoing effort to increase tourism to Hagerstown and Washington County, the City of Hagerstown will be mailing out free Pride ribbons with out-of-town speed camera tickets during the month of June.

"We're extremely excited to leverage speed camera tickets as a means of advertising the great things our city is doing!" said a representative from Hagerstown.

Costing only $50 for each ribbon mailed out, once the recipient pays their speeding ticket the net cost of the ribbons is only $10. Fortunately 50% of that cost is covered through a state tourism grant, bringing the final cost to only $5 per ribbon.

When asked about the idea behind this new campaign, a representative from the City of Hagerstown stated that "the real inspiration was all of the corporations who change their logos to rainbows during June. We thought we're already contacting these out-of-town visitors to get them to pay a speed camera fine, why not give them motivation to come back by giving them free stuff? If they come back and get another speed cam ticket, we'll even send them another ribbon to share with family and friends!"

Some local residents were disappointed in the program. "Where's my free ribbon?" asked one resident, "I don't own a car, but if the city is giving out free stuff I want one too!"

No crazy tourism programs were implemented while writing this article. At least, we hope not. The Hagerstown Report is satire.

Frederick Bear Not As Successful as Hagerstown Alligator 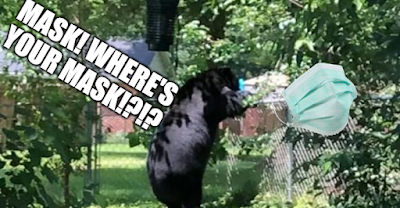 FREDERICK, MD - Frederick County and the City of Frederick, using the Hagerstown City Park Alligator as a model for its program, recently implemented a similar geese population control program using a former circus bear. Unfortunately, the bear program was not as successful as Hagerstown's alligator program.

The program was declared a complete bust when the Baker Park Bear "Barry", escaped and went to visit a children's' playground. However, the Frederick County Council states the bear is being retired due to other concerns.

"The bear refused to wear his COVID mask" stated County Council member Kai Hagen, "I tried publicly shaming the bear into wearing his mask, but it didn't make any difference. For that reason we must retire the bear from service."

The bear program was thought up by several Frederick County Council members who prioritize the environment above all other things, including the safety and wellbeing of the county's residents. The program was even endorsed by Sheriff Chuck Jenkins, who believed the bear's presence could deter crime.

"We really hoped the bear would deter crime, or at the very least deter that profanity sign guy from coming downtown, or that guy we created a secret politically-motivated dossier on." said a representative from the sheriff's office.

Any residents whose property was damaged by the bear are encouraged to contact the City of Frederick for reimbursement of repair expenses.

Barry the bear's career isn't quite over yet, though. He's going to become the new mascot for the Frederick Keys. Look for more on this soon!

No bears got their heads stuck in jars of honey while writing this article. The Hagerstown Report is satire. Also, Hi Chuck.

A-10 Warthog to Stop Dirt Bikes in Hagerstown 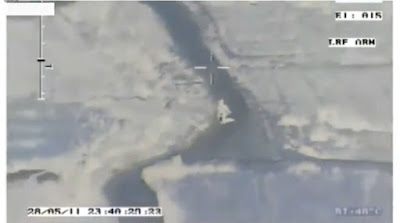 HAGERSTOWN, MD - During today's City Council meeting, the Mayor and Council announced that an A-10 Thunderbolt II, also known as the Warthog, is being purchased by the City to stop the dangerous dirt bike riders the city has seen increase as the weather has become warmer. All of the A-10 Warthogs were built by Fairchild locally in Hagerstown during the 1970's and 1980's.

"The Air National Guard is giving us a great discount," stated a city representative, "normally these cost around 11 million, but we're only spending 5 million."

Every summer the City of Hagerstown has to deal with illegal dirt bikes riding on city streets, and even sidewalks. This year a rider received permanent brain damage due to an accident.

"Our no-chase policy makes it very difficult to stop the dirt bikes, but with the A-10 Warthog we can stop the dirt bike riders once and for all without endangering the safety of any innocent bystanders" stated a representative for the Hagerstown Police Department.

The Hagerstown City Council voted 3 to 2 to approve the purchase of the A-10 as well as approve an ordinance allowing close air support operations for Hagerstown Police Department. The A-10 will be stationed out of Hagerstown Airport, and armed with a 30mm GAU-8 Avenger rotary cannon, capable of eliminating 3,900 dirt bikes per minute.

"This is a really exciting time for Hagerstown! Not only is one of our A-10's coming home to stay, but it's filling an important law enforcement role!" stated a city representative.

The A-10 Warthog will be patrolling Hagerstown's skies starting June 1, 2021. 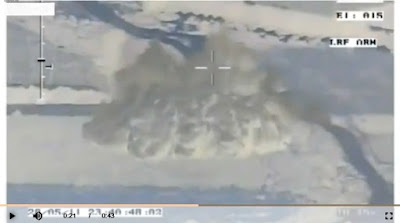 No illegal dirt bike riders were turned into a cloud of smoke while writing this article. The Hagerstown Report is satire. 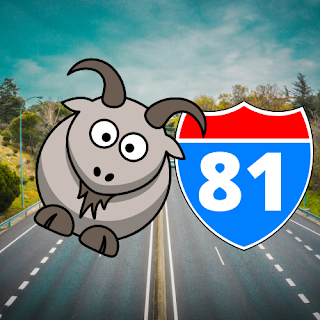 WILLIAMSPORT, MD - The State Highway Administration announced today that its pilot program of using goats as an alternative to mowing along interstates has been a great success, and the state will soon expand the program to other parts of interstates in Maryland.

The state purchased the goat from a local farm several years ago as an experiment to see if goats could be used to control vegetation instated of mowing. After spending approximately $500,000 to train the goat, nicknamed "Willy" due to the goat's proximity to Williamsport, the State Highway Administration released the goat who happily began eating the unlimited food along I-81 and the nearby C&O Canal.

The General Overall Animal Training (G.O.A.T.) program employed by SHA and the City of Hagerstown's alligator based geese population control program are considered much greater successes than the CIA's 1960's program "Acoustic Kitty" in which the CIA spent $20 million to surgically embed a microphone and transmitter inside a cat, released it outside the Russian embassy, and watched in horror as it promptly walked out into traffic and was hit by a car.

"The next step is to expand this to Interstates across the state." stated the SHA representative, "Just wait until people start seeing goats on I-270, they're really going to start freaking out!"

Amazingly, yes the Acoustic Kitty is a real thing. Sometimes truth is stranger than fiction. The Hagerstown Report is satire. 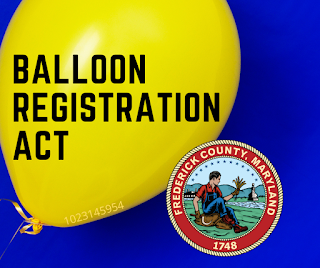 "This year will go down in history. For the first time, a civilized nation has full balloon registration! Our streets will be safer, our police more efficient, and the world will follow our lead into the future!" said one of the Frederick County Council members.

The County Executive's office announced support of the measure as well. "The most foolish mistake we could possibly make would be to allow the subjugated people of Frederick County to possess balloons. History shows that all conquerors who have allowed their subjugated residents to carry balloons have prepared their own downfall by so doing." When asked what the County Executive meant by "conquerors" the County Executive quickly accused the reporter of being racist, and quickly changed the subject.

When government fears the people, there is liberty. When the people fear the government, there is tyranny. The Hagerstown Report is satire. Also, hi Chuck!

First They Came for the Cartoonists - Ars Gratia Politica 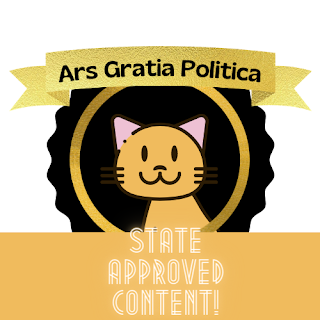 First they came for the socialists, and I did not speak out—because I was not a socialist.

Then they came for the Jews, and I did not speak out—because I was not a Jew.

Then they came for me—and there was no one left to speak for me.

There is an increasingly disturbing trend of companies are stopping or limiting distribution of historical works such as "Dumbo", "Peter Pan", and even several of Dr. Seuss' books, due to the supposed fact that the works "portray people in ways that are hurtful and wrong." And yet, works such as Hitler's "Mein Kampf" are still available for purchase through sites like Amazon.

What makes these works less historically significant than Hitler's? Absolutely nothing.